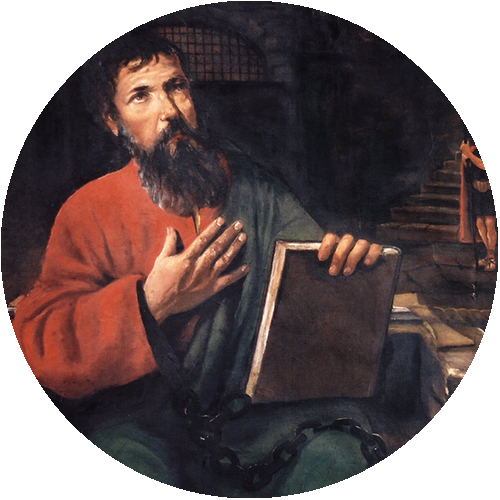 For we preach not ourselves, but Christ Jesus the Lord; and ourselves your bondservants for Jesus' sake. ~ 2 Corinthians 4:5

I've heard it said that had Paul known what people would be using his letters for today at the time he wrote them, he would have been much more careful with what he wrote. While that statement isn't necessarily false, it should be noted that Paul's letters do carry at least a nugget or meaning for us today; certainly not as scripture, but as a window to the past and for our instruction in living by faith. Of course we can derive a lesson from them, because that's why people read them all the time, and that's why people put them in the Bible.

We all know (at least for the most part) Paul's origins: he was a Benjamite Pharisee going by the name Saul of Tarsus or שאול התרסי,‎ as he was called in Hebrew (Acts 9:4). This made him a Roman citizen by birth and inheritance from his father, a Roman citizen; as such, the Gentiles called him Paul. He believed that the masses should not be subject to the minority of priests' oppression and abuse, as most civilians did at the time. Prior to joining the Pharisaic movement, he was a tent maker by trade (Acts 18:3), which was good business for him, since Tarsus was at the time one of the most bustling trade communities on the Mediterranean coast. While overtly critical of Jesus' ministry and teachings, he likely was influenced by them at least slightly due to his brother and sister Andronicus and Junia being early converts (Romans 16:7).

Being what he called 'a Pharisee, son of a Pharisee' (Acts 23:6), he was very well educated in Mosaic law, and came from a long line of faithful and militant proto-Judaists. As a child, he was sent to Jerusalem, where he was taught by the famous Rabbi and scholar Gamaliel (Acts 22:3); he was likely taught philosophy and introduced to historic literature while there. As a young man he contributed to the stoning and eventual martyrdom of Stephen (Acts 7:58-60), holding the outer cloaks of the older Pharisees who were at the time preparing to kill the apostle. But his story of persecution only began there: he spent the next few years hunting down, arresting, torturing, interrogating, and killing any and all Christians he could get his hands on.

However, on the road to Damascus, the resurrected Jesus appeared to Paul in a vision, saying, 'Saul, Saul, why are you persecuting me?' (Acts 9:4). The glory of this spiritual manifestation of the divine Word of God made him blind for three days, during which the apostle Ananias of Damascus cautiously took care of him until his sight was restored by him (Acts 9:17). Jesus told Ananias that Paul was to be a vessel to bear his name among the Gentiles (Acts 9:15). Following the restoration of his vision, Saul of Tarsus was baptized, and during his ministry, he went by his Roman name Paul, meaning 'least'; which was likely a divine reference to his former behavior of hypocrisy and membership among the Pharisees, of which Jesus would call 'least' (Matthew 5:19).

If you'd remember anything from the story of the apostles after the Ascension, you'd know that Judas Iscariot had killed himself upon repenting of his betrayal of Jesus to the Pharisees. This left the spot of the twelfth apostle open; they decided to select one (Acts 1:21). Once they had narrowed the choices down to two men, Jospeh called Barsabbas Justus and Matthias, they graciously gave God the decision. Basically they were saying, 'Okay God, choose one out of these two.' Then, guess what happened? No, not the Holy Spirit descending like a dove. No, not an angel crowning one of the two as the next apostle, nd no not either of their faces shining. Still stumped?

They cast lots (Acts 1:26). They gambled. They played the exact same game that the Roman soldiers played when they were arguing over who got Jesus' clothes. They did the Biblical equivalent of eenie-meenie-miney-moe, and the lot fell to Matthias. Talk about God's choice! Following this story, guess what happened to Matthias? Did he go off on heroic adventures with the twelve, preaching the gospel of the kingdom to the ends of the earth? Did he make a name for himself, earning a well-deserved spot among the apostles of God? I'll tell you: we never hear of him again. Sure, there are some historical records that have information on where he went, what he did, the letters he wrote, his eventual martyrdom, but of course, none of those records are in the Bible, are they?

Paul, in contrast, is everywhere. His story is covered in most of the book of Acts (much more than Matthias, I can tell you that!), his letters make up the majority of the New Testament, and everyone who knew him spoke well of him. The guy even went and checked with the other apostles to make sure that the gospel he was preaching was in accordance with the one they and Jesus preached. He sent likely dozens of general letters to churches, hundreds to churches and congregations across the Near East and beyond, and thousands of letters to individual Christians and apostles that all aren't included in the Bible. But who is called to this day the 'twelfth apostle?' Matthias, of course! Not to say that Paul isn't given enough credit; he is given WAY too much as is, but we seem to have forgotten who God was calling to be the twelfth, but the eleven disciples just couldn't see it.

Paul made plenty of doctrinal errors during his ministry, which are apparent in his letters. His constant addressal of himself as an apostle (2 Corinthians 1:1, Galatians 1:1, Ephesians 1:1, etc.), calling the Christians he wrote to followers of himself (1 Corinthians 11:1), and saying that the Law was done away with, and was replaced by the Gospel (which isn't necessarily wrong, but just taken to an extreme; Romans 8:3) are all prime examples of Paul's mortality. He never was with Jesus, so he naturally could never have known exactly what he taught, although he made a noble effort by checking in with the other apostles from time to time. We also have to remember that the apostles made mistakes too, which is why we can never fully put our trust in anything but the Gospels.

If you enjoyed this article, please share it with others, print it out, or you could even copypasta it onto your own site (ask me first, please ;)). If you aren't already, I'd encourage you to read the Gospels. They can and will change your life. May grace come, and this world pass away; Maranatha, amen.

To return to the Index, click the Jesus icon below.